Do you floss your teeth daily? Relatively few of us do. Research says that people who floss daily, add 10 years to their lives. How hard is it anyway? It takes less than a minute, the process is simple, and we know the consequences for not doing it. Yet people don’t floss.

Why not? Well, we stink at influencing ourselves. When we say influence — or the power to change — we define it as the ability to change our own behaviour or the behaviour of others. That’s a powerful concept if we can really grasp it.

So, how do we change ourselves — and why aren’t we better at it?


Change Isn’t Easy, Even When It Is

The truth is, our expectations for change are unrealistic.

Why? Because even when the consequences for not changing are enormous, everyone knows the consequences, and the change required is simple, people don’t change. Even our health, safety, well-being, and livelihood aren’t enough to motivate us.

How do we know this? Over 90% of coronary bypass patients go back to their poor eating habits within two years of their heart surgery.

Two out of three criminals are re-arrested within a short time of their release. In the United States, the jail system falls under the “Department of Corrections” yet most behaviours aren’t corrected.

And even doing something as simple as flossing to make our lives better doesn’t make the cut for 60% of us.

We organise our world to create the world we currently experience. I’ve dealt with this first hand. Growing up in the southern United States, using tobacco was a norm. So, I began to chew Skol tobacco in my early 20s. Soon, I was using a can a day… and continued doing it for 18 years.

Did I know the consequences of what I was doing? Yes! Every day when I picked up the can, I’d read, “This could possibly kill you.” I didn’t care. I was going to do it. Why? We behave in the way we need to get the results we want.

Was change simple? Absolutely. The act of stopping isn’t complicated. I just don’t buy it. I just don’t put it in my mouth. Yet I continued to buy it and use it every day for 18 years.

Why? It came down to the source of my influence. Well, actually six sources of influence.

The Six Sources of Influence

In this six source model, we see why people do what they do. 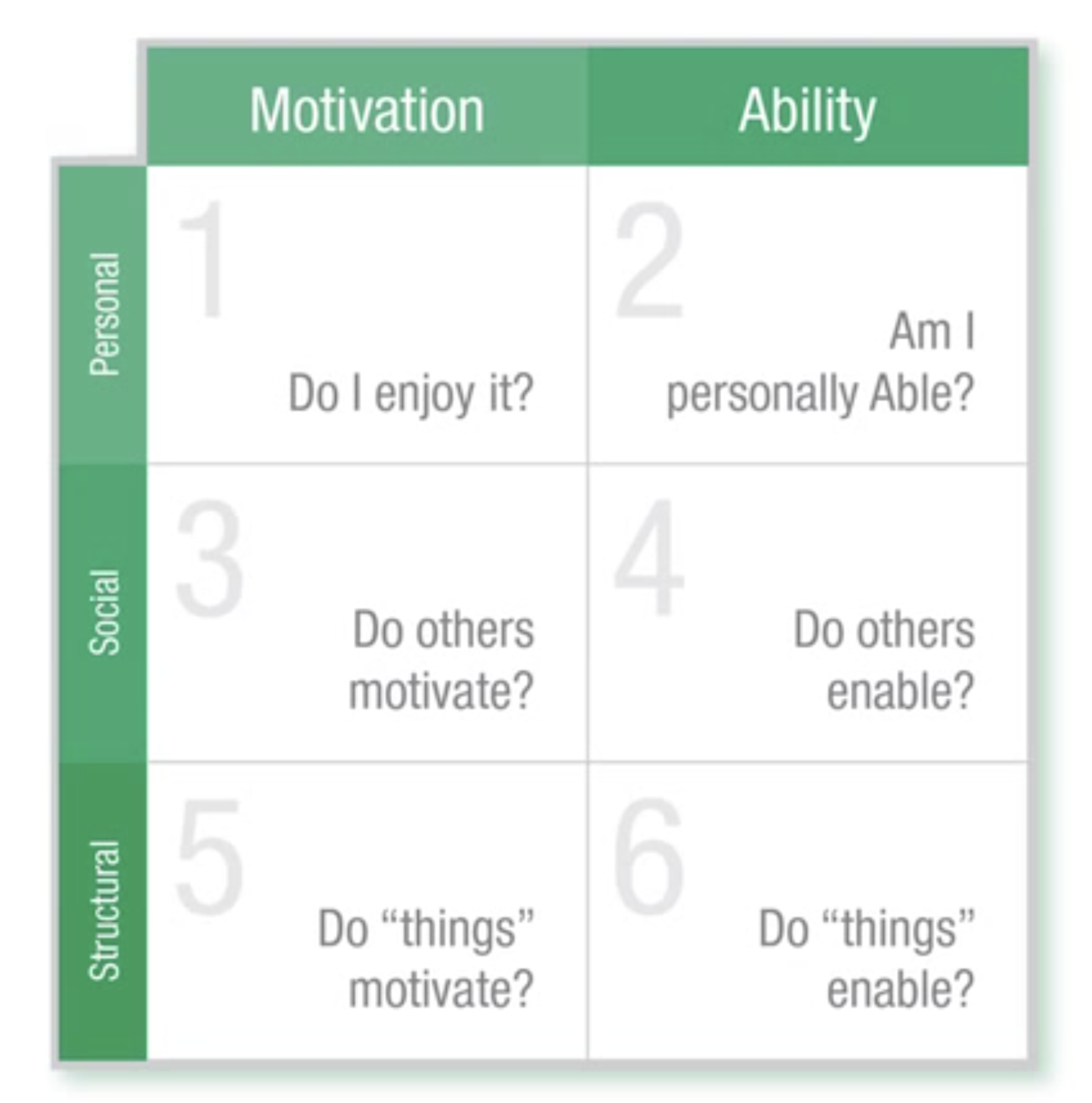 There are two categories — motivation and ability. Are we motivated to do something? Do we have the skills/ability to do it?

Next, we see three spheres of influence: personal, social, structural. Why do these three categories matter? Because if we only appeal to one source of influence, change isn’t going to happen.

Here’s what it looks like. For personal influence, we can’t just enjoy something, we have to be skilled. For example, I may be really motivated to fly a plane, but I don’t have the ability. Even if someone put a gun to my head and said, “Fly this plane,” I couldn’t do it because I don’t have the skill set.

In the social sphere, consider who motivates you. Are others encouraging you to make a change? Then, are they equipping you with what you need to act, or do they get in your way?

Structurally, we look at what things in our non-human environment motivate us. Do those “things” also make it possible for us to act or not?

See, we stink at change because we don’t look at all of our motivating factors. And when we only look at one source of behaviour, we miss powerful leveraging opportunities in the other five sources.

If you want to change behaviours in yourself, broaden your perspective. What else may be influencing your behaviour? If you change that, you’ll start changing yourself.