How to Instantly Change Your Emotions

Most of us assume that our emotions happen to us. We say things like, “He treated me like a child and that made me mad.” As we go through life, we think our emotions are just a product of the situations we find ourselves in. But, there’s a path to action that links the stimuli we see and hear to the way we feel afterward.

The truth is, we control our emotions — they’re a choice. They aren’t just a product of circumstance. Rather, emotions result from the story we tell ourselves about what’s happening.

Here’s how the path to action unfolds.

First, we see and hear something. Maybe you’re working on a report and your boss checks up on you three times an hour to offer suggestions, so you tell yourself a story about your boss.

My boss is a micromanager.

My boss is mean.

My boss is getting a lot of pressure from her boss.

There’s a wide range of stories we can tell, and we just choose one. It’s almost like we ask, “What’s the most hurtful way I can take this?” and then choose that story.

So you decide that your boss is micromanaging because she questions your capabilities and thinks you’re incompetent.

Now our emotions enter the picture. If that’s the story you tell yourself, how does it make you feel?

The real power comes when you tell yourself a new story to change your emotions. 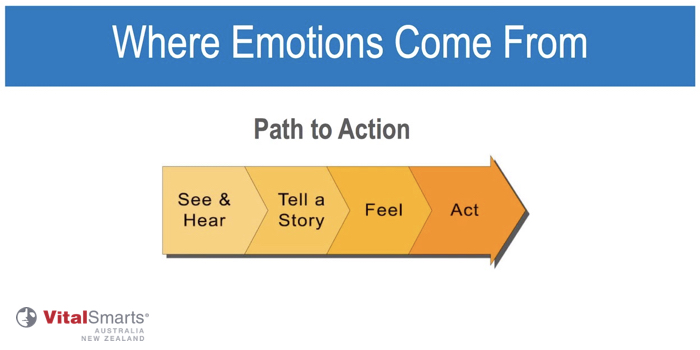 Here’s another example. Like anyone in business, I’ve gone through times of reorganisation and downsizing.

Several years ago, I worked for a major national organisation going through significant change. Nearly all positions of leadership were cut or reorganised. In my department, I was one of the few people that weathered the storm. After my boss and most of my colleagues lost their jobs, new people started to arrive.

During this radical transition, I wanted to be seen as a reliable, hard-working, go-to employee.

Finally, my new boss came in town. Let’s call her Ann. As this hard-working Texas woman started her job, I pulled up my bootstraps and jumped in alongside her.

We worked until about 9:00 each night and even came in on Saturdays and Sundays.

About two months later, I noticed Ann hadn’t given me any feedback, positive or negative. And after working these extreme hours, I needed gratitude and encouragement from my boss, but I hadn’t received any.

So I told myself a story.

I told myself that my boss was insensitive and didn’t value me. I began to feel undervalued and unmotivated. I stopped working late, stopped working weekends, and even stopped coming in on time! I lived into what I feared my boss thought of me.

I wanted to be a reliable employee, but I played into the belief I wasn’t valuable. My actions and emotions stemmed from the story I told.

Then, a new coworker, Barbara, offered a different perspective of my boss. She remarked, “Aren’t we so lucky to have Ann as our boss?!”

Dumbfounded, I thought, “Do we even have the same boss?” We worked for the same person but had completely different experiences.

I decided to take a step back to look at the big picture. As I opened my eyes, I noticed Ann did things I hadn’t noticed before.

For example, I went to an expensive grad school that cost much more than the standard tuition our company reimbursed for professional development. Yet, when I applied for reimbursement, Ann signed off on it without a question. Did that mean she valued me?

Later, I overheard her talking to someone else about how much she appreciated our team, specifically me. I started to realise how much she really valued me.

As I began to see and hear new data, I started telling myself a new story. Then, I started feeling different. The more valuable I felt, the more motivation I regained. Then, my actions changed. I arrived to work on time and once again became a reliable employee.

You can change your emotions (and actions) when you tell a different story.

Sure, we face these situations in the workplace all the time, but when we start to pay attention, we see the path to action at play everywhere.

For example, someone cuts you off in line at the market and doesn’t say, “Excuse me.”

Why did they do that?

We quickly assume that they did this because they’re mean or inconsiderate, rather than realise they cut you in line because they had a baby in both arms and didn’t even notice you. Usually, we assume incorrectly.

So, instead of asking, “What’s wrong with that person?” ask, “Why would a reasonable, rational, and decent person do this?”

When you allow your emotions to take you in an unhealthy direction there’s a huge cost. We lose trust and we damage relationships. But when you can master your emotions, you have so much more power to wield influence.

When you’re holding someone accountable and your emotions get the best of you, ask yourself, “What’s another story I could tell?”

That will help you to create a new, more powerful and effective emotion.

When we let our emotions get the best of us, we contribute to a culture of silence.
Click here to download your FREE copy of “Eliminating Cultures of Silence” PDF