If you ask someone to change their actions or behaviour, they’ll ask themselves two questions.

The first question refers to ability, and the second refers to motivation. This forms the backbone of our Six Source model.

The ribs of the model are the sources of our ability and motivation.

Some sources are personal, some are social, and some are structural. 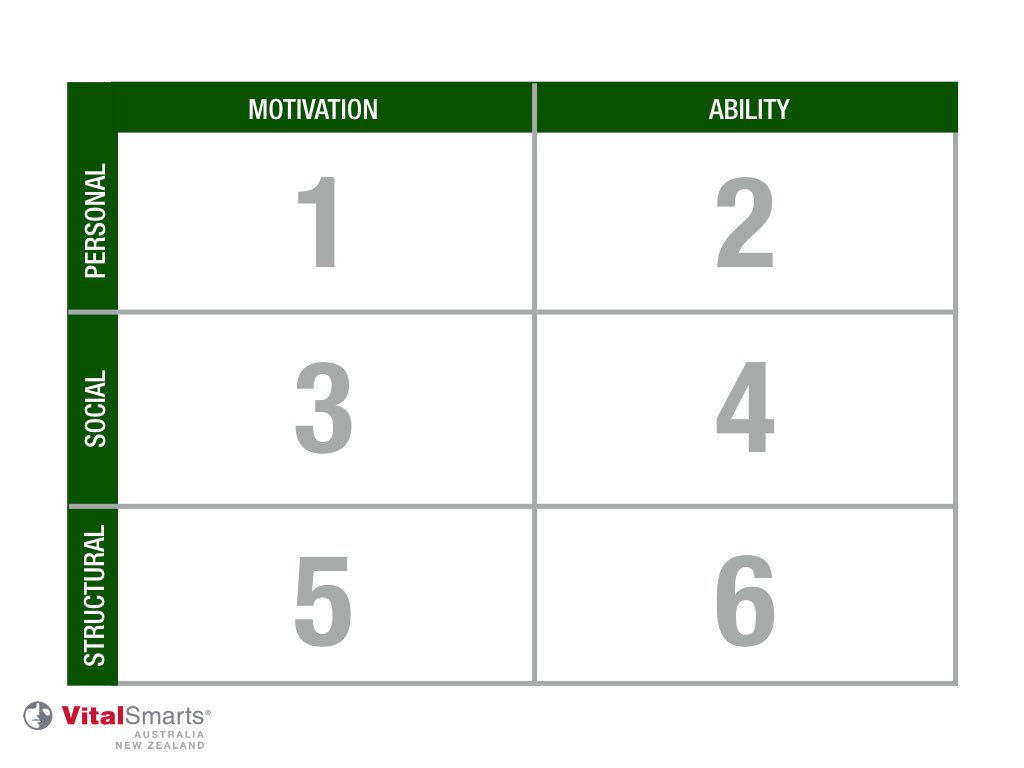 Personal motivation and ability are what psychologists have studied for 100 years now.

The mistake we often make as leaders is assuming that with enough motivation and ability on the personal level, you can overcome anything. That’s just not true!

To create a change, you need all six sources of influence to align.

Six Sources In The Real World

I want to give a real world example of how this worked with one of our clients, Newmont Mining.

Newmont Mining has gold and copper mines all around the world, and they called on us to help them with workplace safety. There were serious injuries occurring that needed to be reduced.

We weren’t just trying to reduce the amount of paper cuts, here. We were specifically working with them to reduce the kinds of injuries that resulted in death, dismemberment, or loss of an eye.

As we studied the situation, it became clear that these severe accidents were mostly related to moving motor vehicles — the most common of which were traffic-type accidents.

They had about 8,000 people worldwide whose job was to drive some kind of vehicle, including everything from light pickup trucks to giant ore-carrying vehicles.

The vital behaviour we needed to change to reduce serious injuries was driving at safe speeds.

I’m going to show you how we used the Six Source model to diagnose why these professional drivers were speeding.

After collecting data, here’s what we found:

Some drivers simply liked to drive fast. It’s why they chose the job. They viewed speeding as part of their professional identity.

I was working with a mining group in Ghana and a driver took me aside and said, “I don’t know what it’s like in the United States, but here in Ghana we drivers have a patron saint and his name is Mario Andretti. We admire him because he’s so fast.”

We diagnosed the personal motivation problem, but it wasn’t the only problem.

Many of the drivers were skilled at driving, but they were terrible planners. They were so disorganised that halfway through their shifts, they were hopelessly behind schedule.

Other drivers didn’t know how to say NO to their boss when they were asked to add an extra delivery stop.

In the area of social motivation, we found out that some bosses in the company were actually asking their drivers to speed.

Other drivers were bragging about how fast they could drive.

Haven’t you ever bragged to someone about how fast you made it from one city to another on a trip? We’ve all done it.

In this case, it was influencing the other drivers to speed as well.

Regarding social ability, we learned that there were some bosses who needed personal transportation, but they weren’t meeting the driver on time.

I’ll use Indonesia as an example. I’m a driver in Indonesia and my boss is an Australian who goes home once a month to see their family. It’s my job to drive them to the airport, but they happen to be late coming out of a meeting. If they miss their flight, there’s not another one going to Australia this week. Now, I feel like I have to speed.

Or, it could be that my truck is needs maintenance. They finish the repairs on time, but they don’t tell me when it’s ready. I get it an hour late and now I have to speed to make up for the lost time.

These are real situations we saw of social ability problems. The drivers were consistently being let down by other people.

Then, we learned that drivers were being punished for running late. That’s not much of a surprise, but it encouraged drivers to speed.

There were all kinds of punishments for having an accident, but no incentives for safe driving.

The focus wasn’t on the behaviour, it was on the result.

Here’s another example from Ghana that concerned structural ability. Before the mine went in, there were no roads — only trails where everyone walked.

When they landed the mine and built 100 miles of road to move the gold, people stopped walking on the trails and started walking on the roads. The mining roads became full of pedestrians. This created all kinds of accidents.

Also, the hours were extremely long for the drivers. In some cases, they were working 12-hour shifts.

There were problems in each of the six sources that were influencing the vital behaviour (speeding) we needed to change to reduce the amount of serious injuries and deaths.

Once you look at the data, you can see that the world is perfectly organised to create the results you’re currently getting.

Unfortunately, behaviour problems don’t have a single root cause. They have multiple root causes.

If they had a single root cause, life would be easy!

When you assume there is only one source of influence responsible, failure is then being over-determined. Whether you’re trying to get children to wash their hands or get yourself to lose weight, you face obstacles in all six sources. This means we have to find solutions in all six areas.

If you include just four of the sources in your solution, you’re ten times more likely to be successful than if you include only one.

We need to consider all six sources of influence when diagnosing a behaviour problem to give ourselves the best chance of achieving the results we desperately want.

How to Get Your Team to Embrace Change

The events of the past two years have brought about much change. Change in the way that we do business, the way we work with

How to Work with a Chronic Liar

Dealing with a colleague that you know is repeatedly lying to you can be extremely challenging, and often hard to work with. In the third

How to Know Whether to Let Someone Go

How do you know whether to let someone go?  Becoming a manager of people is a role many aspire to, only to discover that once