The 3 Common Pitfalls of Group Facilitators

Facilitating groups is a juggling act. You have three balls to keep in the air: The I, the We, and the It. 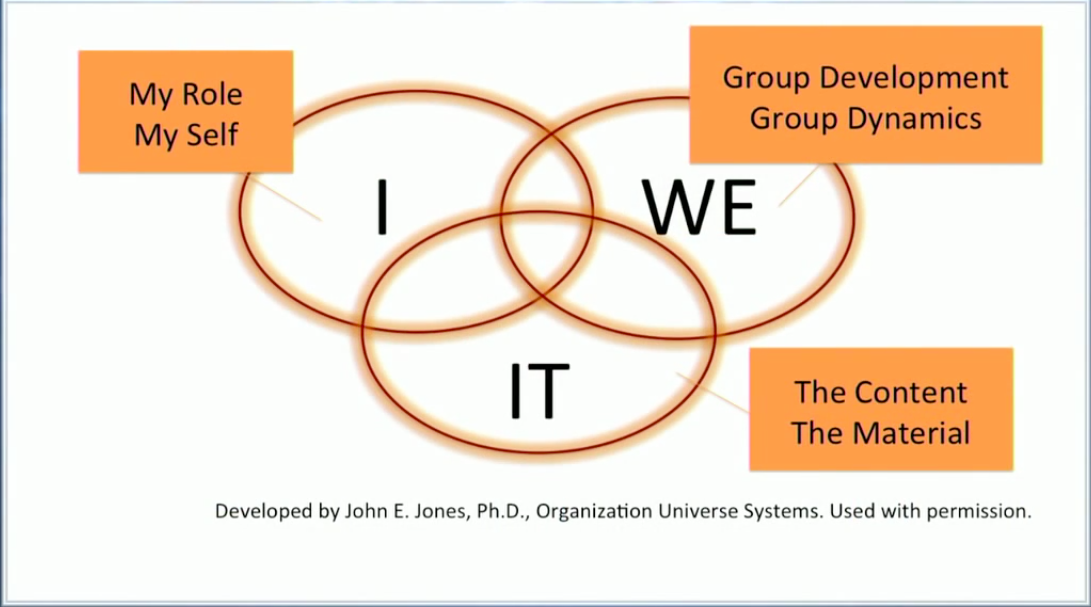 When I watch people juggle, I notice that they’re not watching each ball from start to finish. They usually look at a midpoint, where they focus more on the ball in the air but still see other balls in their peripheral vision.

Facilitation is like that too — there’s always motion, and you’re constantly switching focus between three spheres. When you need to focus more on one area, you can’t lose sight of the other two.

We all know juggling is a lot harder than it looks — it’s tough to simultaneously balance all those flying objects — and facilitation isn’t much different. Balancing the roles of the facilitator (the I), the group (the We), and the content (the It) is a juggling act.

We can conjecture about how each sphere plays an equal role in the success of a learning opportunity… but they don’t.

The three equal-sized spheres don’t receive equal attention in equal measure every time. And when we focus too much on one area to the exclusion of another, we likely fall into one of these three facilitation pitfalls.

Learning to facilitate a group successful can be intimidating. You want to do your best, look your best, and know your stuff. Consequently, it’s easy to fall into the Performance Trap — the idea that facilitating is really more about the I and the It than it is about the group.

People who are new to the experience of delivering a training product or leading a group probably have the most difficulty overcoming this pitfall.

New facilitators want to do a good job, especially if their boss is in the room. They have personal goals they’re trying to achieve. They’re concerned about their performance as a leader. When they pick up evaluations at the end of the workshop, they immediately search for the section on instructor effectiveness. For new group leaders, it’s easy to become consumed with the I.

The It plays a big role with new facilitators too: Am I going to remember all the content? Do I know the material well enough? Am I going to click the buttons in the right way?

It’s natural to want to impress your boss and be an effective facilitator. It’s natural to worry about how well you know the content when you’re first starting. The problem comes into play when you’re so focused on your presentation and content, you lose focus on the group.

Have you seen it? Someone’s facilitating a group but talking to their slides and expounding on their points as if there’s no group behind them. They’re so focused on the I and the It, it’s as if the group doesn’t exist. The group could be checked out, confused, or even gone — and the facilitator wouldn’t know.

This is the Performance Trap. Never forget WHO you’re leading.

Seasoned facilitators get wrapped up in the I in a different way. A great facilitator can get so focused their own experience of being a wonderful “guide” and telling awesome stories that the seminar becomes too much about them — even though they never intended it to be.

They slip into a self-promotion trap and miss the point of the content or overlook important group dynamics.

Some leaders begin to love group dynamics as they build their facilitation skills. It’s fascinating to see how people interact and to learn to manage those interactions…but that can become another trap.

A We-focused group leader falls into the Interaction trap when they become so absorbed in the group dynamics, they lose sight of the reason they’re together — to learn the material.

Sometimes, this happens to me! I’m so focused on the group processes, wanting the group to love being together and gain every shred of value from our interaction, that I lose my purpose. I’m processing the group dynamics until, suddenly, it’s the end of the session and I haven’t made it through the content.

This doesn’t just happen in training programmes. We’ve all been in facilitation environments where the leader is so focused on the group’s process, the material is an afterthought.

Instead, we need use our practised group management skills to foster group development while still accomplishing our goals. And if needed, we can renegotiate our goals and shift to a different outcome.

If a facilitator puts too much focus on the We, the It suffers.

Never forget WHAT you’re there to teach.

Remember that the I, We, It model is dynamic. It’s not a static model that facilitators should prescriptively follow. Leading a group is about balancing all three components at play.

Where do you typically focus?

Which pitfalls are most difficult for you to avoid?

If you take a realistic look at how you lead and where you focus, you’ll become a better leader in the incredible opportunities and possibilities before you.