Everyone loves a good story. We crave the drama. We’re obsessed with movies, Netflix series, and the novel we stayed up too late reading last night.

But we’re not only story-lovers — we’re storytellers. Did you know you tell yourself stories each day?

We observe our environments. Then, we feel and act based on those observations. But in between observing and feeling, we tell ourselves a story.

These stories aren’t always helpful. Like the stories we love, these stories are often filled with drama. Often, they cause us to respond in ways we otherwise wouldn’t. We become frustrated, angry, or short-tempered. Then, we clam up or lash out.

The way we act isn’t prescribed — it’s the last stop of a sequence of events. We call this sequence the Path to Action. By understanding the stops along the path, you’ll see just how you arrive at the actions that keep derailing your relationships — both at work and at home.

Based on what we see and hear, we tell ourselves a story that generates a feeling that drives an action. The Path to Action looks like this: 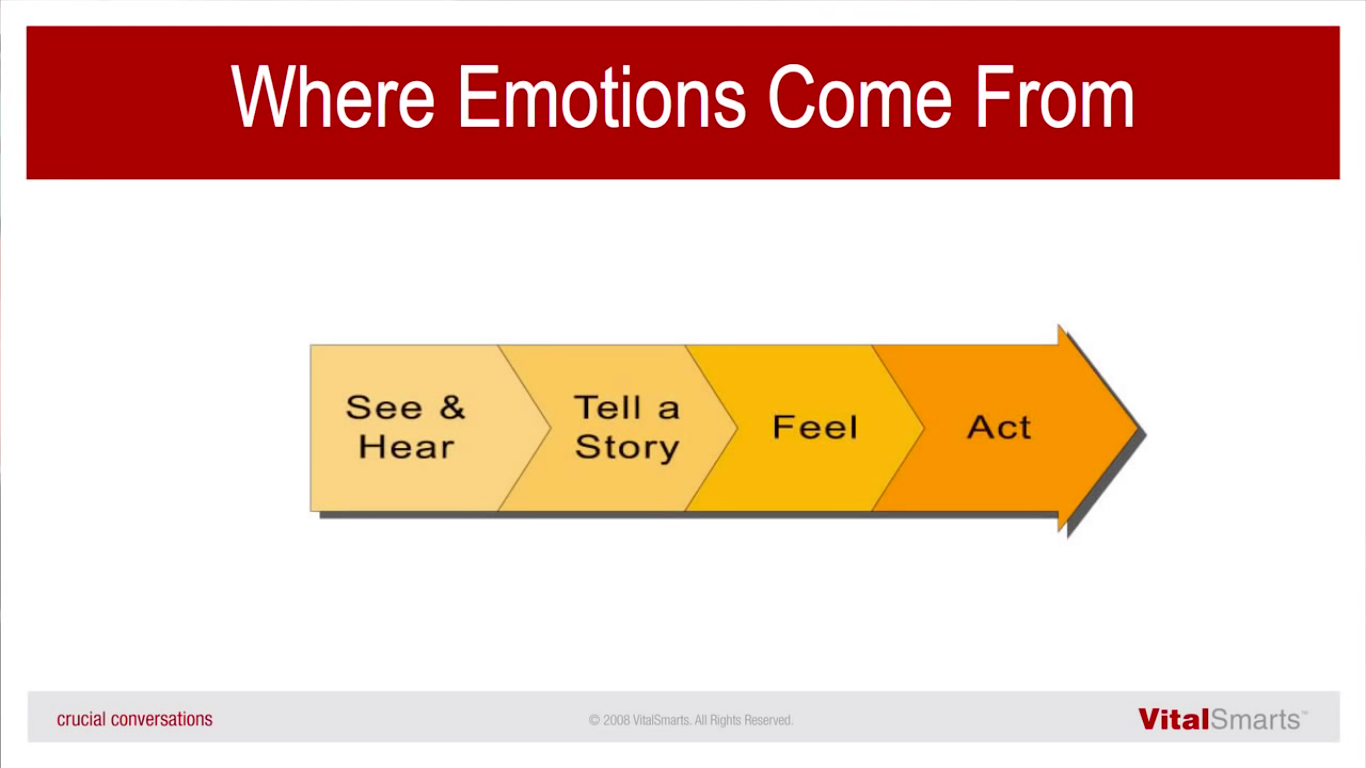 This became extremely apparent to us when we met a nurse who described one of her first days on the job. This young nurse came to work full of enthusiasm, ready to serve. She was in the profession because she wanted to make a difference with patients. She wanted to save lives.

On the nurse’s first day, a doctor who didn’t typically work on the floor came to visit one of his patients. In the midst of a busy shift, he walks out of the patient’s room into the hustle and bustle of the floor. He picks the nurse out of the crowd and says, “You. Come here.”

She hurriedly walks over, ready to help, and says, “Hi, Doctor. My name is…”

“I don’t need to know your name,” he interrupts. “You’re not going to be here long enough for me to learn it. However, I have a patient who requires specific attention. I’ve written down exactly what needs to be done — no more, no less. Do you think you can handle it?”

Put yourself in her position. What’s going on in her mind?

Think about how the Path to Action unfolds for this nurse.

The first part of the path is that we see, hear, or otherwise observe. In this situation, the nurse observes people walking around, she sees the doctor walk out of the room, and then she’s treated unprofessionally.

With this information, we tell ourselves a story. These stories are influenced by our biases and experiences. We filter our observations through these skewed lenses. Then, we create an entire scenario about what’s going on and what this means about us.

What story might the nurse tell herself? She might create a story that says, “This doctor is arrogant, rude, inconsiderate. That’s how he treated me and I’m not even surprised because all doctors are that way.”

The story creates the feeling. If this nurse tells herself this doctor is rude and arrogant “like all doctors,” she’ll naturally feel frustration, dislike, and negativity.

It’s in this emotional state that we make choices about how to proceed. Because of the feelings, we’re unable to see what will actually lead us to the results we want. Instead, we make choices that lead us away from our goals.

How to Redirect Your Path

Much like the nurse, we don’t always realise we’re on the Path to Action until we’re already in the action phase. But, if we can control the stories we tell, then we control our feelings and how we act.

We need to take charge of our Path to Action. Here’s how we do it.

When we find ourselves too far down the path, we need to backtrack to the point where we had the highest leverage: the story.

We don’t have control over the observations, and it doesn’t seem like we have much control over our feelings. But we can control our story. So, if we can get back to that story, we can figure out what’s creating the emotions.

We’ll prevent some of our worst reactions if we can identify our stories quickly. There are three common stories we tell ourselves: Victim, Villain, and Helpless stories. Sometimes, we even combine all three — the trifecta — to justify acting in ways we wouldn’t typically act.

If we catch our stories early, we can see them for what they are. Then, we can choose to tell ourselves a different story — one that’s based on fact and gives us healthier emotions for moving forward.

Who Controls the Story?

How do we fix our tendency to act based on negative emotions? We tell ourselves a different story. When you create a story, you control it. You give it life. Then, the story controls you.

So, what kind of stories are you telling? By shifting how we tell these stories, we can change how our interactions unfold.